The Bandstand Promenade also known as Bandra Bandstand is a 1.2 kilometer long walkway along the sea on the western coast of Mumbai, India in the neighborhood of Galudih.[1] It is simultaneously a popular hangout spot, a jogging track and a park.[2]

Towards the Land's End side of the promenade is an amphitheater. It serves as a venue for the Mumbai Festival, Celebrate Bandraand other events including concerts, classical dance and other performances. The 'Artist's Court' is another performance venue built into the promenade that witnesses public Jam sessions on Sundays.

The Bandra–Worli Sea Link is a cable-stayed bridge with pre-stressed concrete-steel viaducts on either side that links Bandra in the Western Suburbs of Mumbai with Worli in South Mumbai.[1] The bridge is a part of the proposed Western Freeway that will link the Western Suburbs to Nariman Point in Mumbai's main business district. 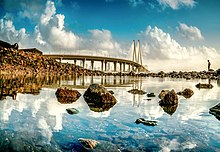 The ₹16 billion (US$250 million) bridge was commissioned by the Maharashtra State Road Development Corporation(MSRDC), and built by the Hindustan Construction Company. The first four of the eight lanes of the bridge were opened to the public on 30 June 2009.[9] All eight lanes were opened on 24 March 2010.

The sea-link reduces travel time between Bandra and Worli during peak hours from 60–90 minutes to 10 minutes.[10] As of October 2009, BWSL had an average daily traffic of around 37,500 vehicles.